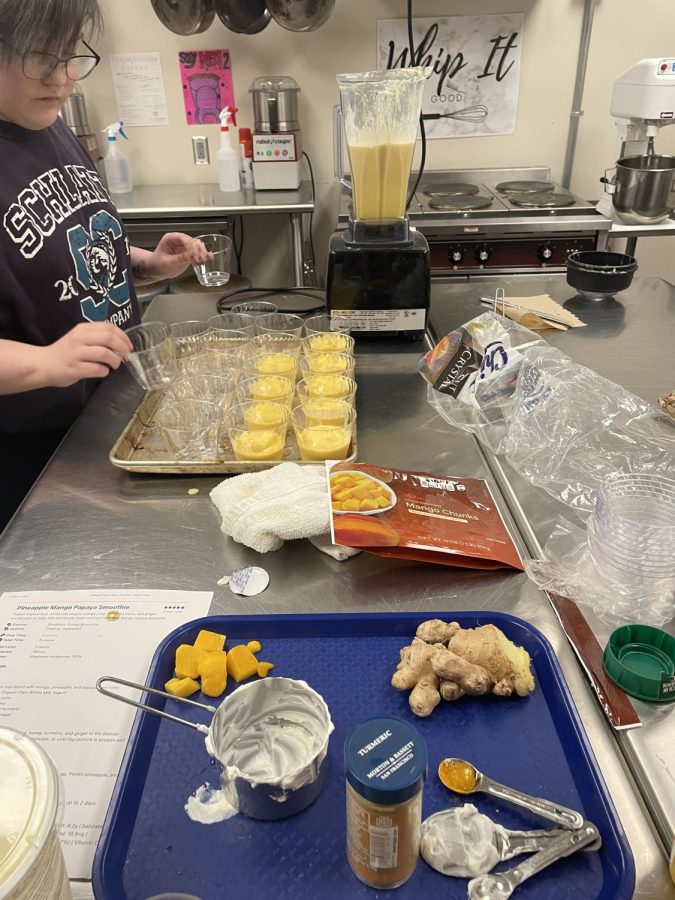 Gallery|4 Photos
Cadee McCoid
Smoothie Spot. The delicious pineapple and mango smoothie did a good job cleansing palettes in between dishes. They took only about 6 minutes to make as well. “I’ve always loved smoothies and my mom use to make them for me when I was younger so it’s a comfort food” junior Cassie Hollis said.

On May 17 the newspaper staff and a few faculty members were invited to Mrs. Schmit’s ProStart II class and try some of the dishes that the student chefs created. In addition to food, the students also created food trucks and brands and planned a dish to match the theme of their food truck. They called this activity Food Truck Wars.
“Food Truck Wars” isn’t really my idea. I’m a part of a Family and Consumer Sciences (FCS) Facebook group, and it’s a space where FCS teachers from all across the country share ideas & resources,” Ms. Schmit said. “I’ve seen a lot of teachers post pictures of their classes participating in the activity and I thought it would be a great way to implement all of our curriculum we have learned throughout ProStart.”
The activity consisted of just four students due to the seniors graduating. Each student had one food truck and one dish to match the theme of the food truck. The people who were invited to come and try the food were given fake money to tip the cooks based on how much they liked their food.
“Mia Rodriguez won with her Made in Mexico theme,” Ms. Schmit said. “She prepared fresh guacamole that is a family recipe.”
There were four food trucks that participated in the wars. Picky Choosy, Smoothie Spot, Wings N’ Stuff, and the winner, Made in Mexico. Students worked hard to create delicious food for everyone to try and enjoy.
“I personally am a really picky eater and I know a lot of other people are too so I made a kids menu for my theme.” sophomore Samantha Otten said.
Most of the students picked dishes that they were already familiar with so they were not making these dishes for the first time. This was also the first year that the ProStart class did a competition styled project like this, and Ms. Schmit stated that they will probably do more in the future.
“Students seem to like the competitions and it gives them more ownership to their work.” Ms. Schmit said. “I usually let students find their own recipes so it’s not just me saying “make this recipe,” but they get to decide what they are preparing.”
The event was very successful, they had many teachers and students come to try the dishes and a large number of people were able to find an option they liked. The entire newspaper staff enjoyed all of the food they tried.