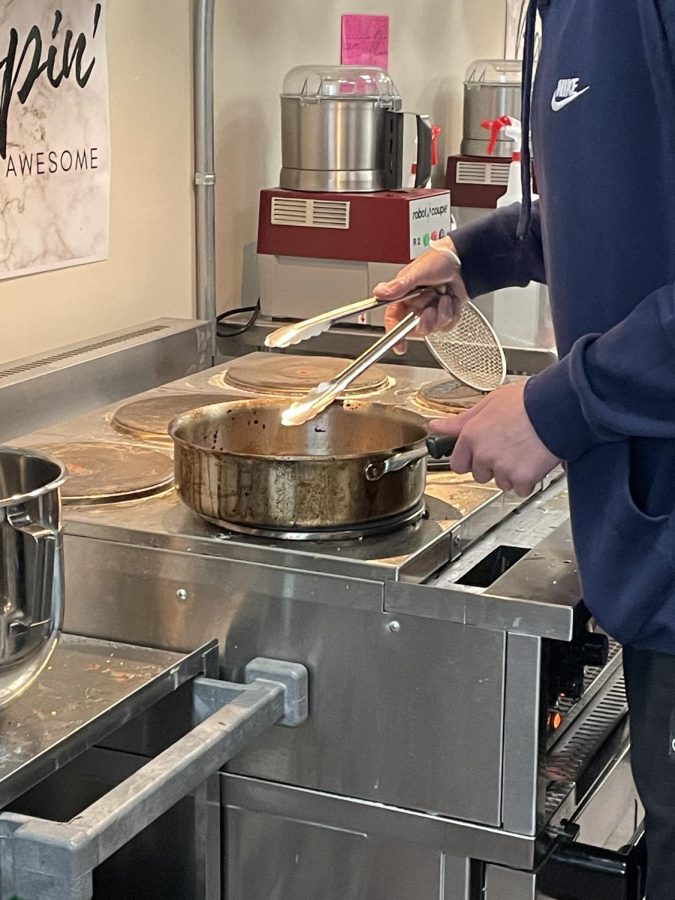 Gallery|2 Photos
MaryJane Fletcher
WINGS AND STUFF As a member of the Pro-Start class, junior Gavin Gragert’s food truck was called Wings and Stuff and featured fried pickles. “I messed up a little bit,”Gragert said “I breaded them yesterday and they sat out, so the breading soaked in. They won’t be as crispy.”

Food is something almost every teenager enjoys; therefore, it is no surprise that the food classes are popular among students. The food classes do many interesting things, one example of this is the food truck wars that happened in Pro-Start. Only four students were left in the class after the seniors graduated; each of the students created a mock food truck.
They each made a menu of what their food truck would serve, and during seventh period on Tuesday, the class held a taste test for their food truck wars. Each truck made one of the items on their menu to be taste tested. The four competing dishes were, fried pickles, a smoothie, mac and cheese, and guacamole.
The fried pickles were the first dish I sampled. They were made by junior Gavin Gragert, whose food truck was called Wings and Stuff.
He made his truck to be like what a sports bar would be as a food truck. The paper cut-out of his truck looked like a flame, the bottom was yellow which faded into orange, and then red.
It had an appealing presentation. The fried pickles were separated into portions of three to four in a clear, plastic cup. The pickles looked crispy and mouth watering.
I enjoyed the fried pickles taste as I think the sour tang of the pickle was excellently complemented by the savory flavor that was introduced by it being fried. It was crunchy and less salty than I imagined them tasting.
My only complaint would be that some of the pickles were sliced too thin. This caused their taste to be overwhelmed and fade into the fried flavor.
The second dish I sampled was the smoothie. It had a smooth texture and wasn’t overcome by excessive sweetness like some smoothies are. It maintained a nice flavor of fruity goodness.
I tried the mac and cheese next. I think the noodles were cooked perfectly as they weren’t hard or soggy like the noodles that can come out of mac and cheese boxes.
Last was the guacamole. I believe the guacamole was exquisite, it was a nice creamy texture and did not leave a bad aftertaste.
In all, I estimate the food trucks were a success. The students put an obvious amount of effort into their trucks; and, it paid off, as all the food was delicious and prepared well.