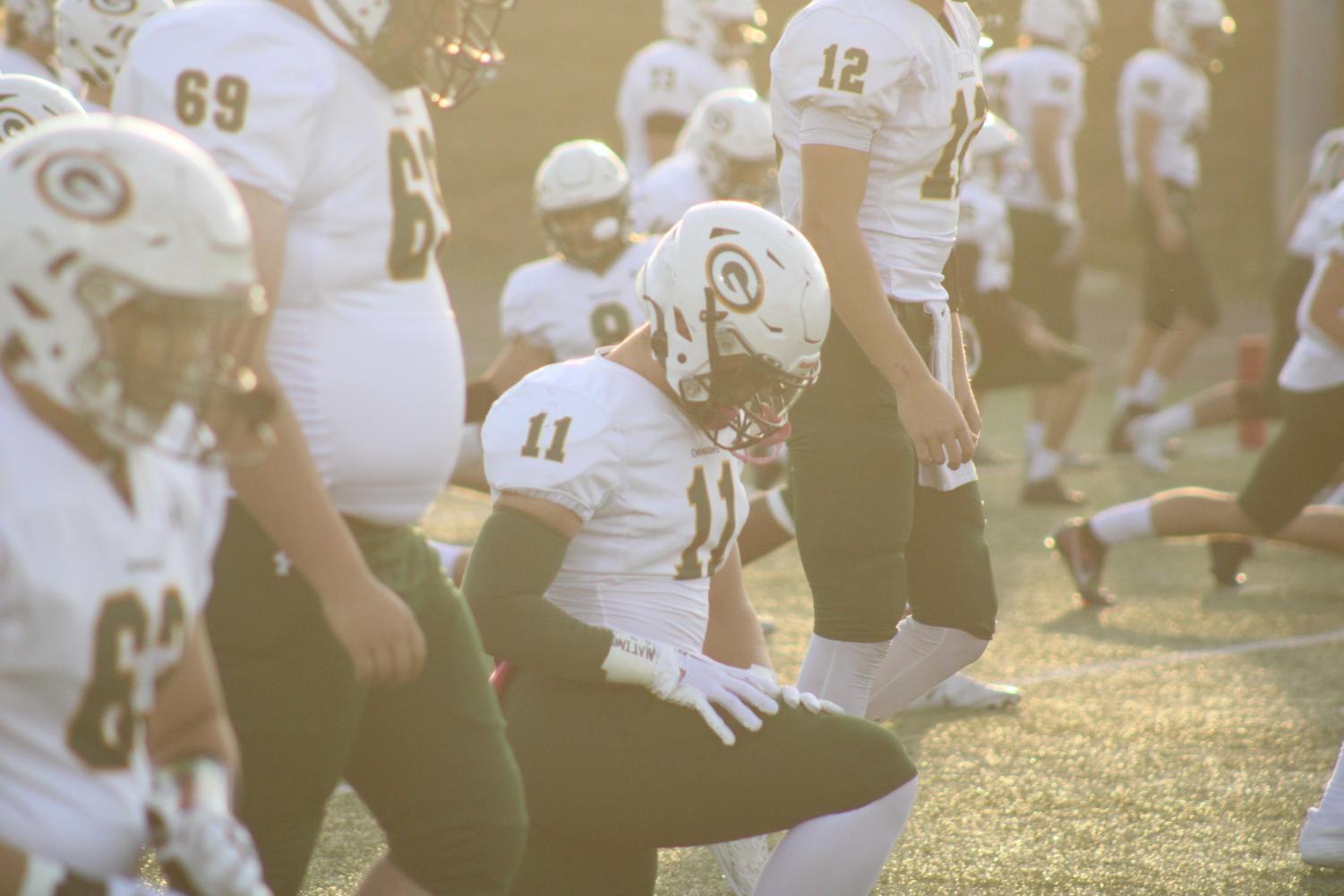 Korver Demma (23) and the Dragons warm up before their game against the Papillion-La Vista South Titans on Oct. 6. (Drew Rhoades)

Korver Demma (23) and the Dragons warm up before their game against the Papillion-La Vista South Titans on Oct. 6.

Gretna Ventures to Lincoln for Rematch Against Westside

A town rallied behind one team. The final time before friends become rivals. A chance for glory and vengeance in the face of a former foe. To some, it may seem like another game that just puts one on top of them all, but for Gretna, this game decides how they go out and put their mark in history.

“From last year, I think our team knows the feeling of winning a state championship,” junior Isaiah Weber said. “We want that again so we are working ten times harder to get that feeling back.”

Most know the storied history of last season for the Dragons. They went all the way to Lincoln and won the state championship over Westside. Months went by, though sometime in December, an investigation into an ineligible player on the Dragons began. Officially, Gretna was forced to vacate the title, pulling the feeling of pride out from under their feet but leaving them with one more goal.

“The team motto this year is to ‘stay hungry,'” senior Zane Flores said. “It means with everything that happened last year and winning the championship, we can’t be satisfied with just that. We have to keep working every day. We gotta come to practice every day hungry for more, always be willing to get better, always be willing to work hard every day and make the most out of every practice.”

Flores and the Dragons lived up to this promise, cruising through the season going 9-0. Even with some tough victories over Creighton Prep and Bellevue West, a looming threat remained. Westside had edged them in the points category, and if they wanted to see them again, it would be in the championship. The final path was paved and one final goal was set.

Going back to the 2019 season, a second-year NSAA Class A school in Gretna was getting thrown around by every team. The only bright spot on the team was a freshman quarterback, and although the stats might not have looked good, a star was blooming in Zane Flores. His second year would be riddled with COVID-19 and a shorter season. Not much came out of it, but a breakout season was on the horizon. Flores led the Dragons to Lincoln for the first time in Class A and brought home the state title. He later committed to the University of Oklahoma State on April 17, 2022, and already cemented his history in Gretna history. Flores was not done yet, as he went on to lead the Dragons back to Lincoln for the rematch most had been waiting for. In his final season, he has the chance to go out with another title and further solidify himself as one of the best in school history.

In reality, this is not just an end for Flores. A town some once may have considered small, Gretna has grown into something much larger. The second high school was built to accommodate the student population, with this being the final year Gretna is just simply known as the Dragons.

“I’m going to miss some of the friends I made at the old school, but it will be fun to be the first class at the new school,” sophomore Carter Lightwine said. “It will be interesting to see how sports are with less teams and less kids, but who knows if we’ll be good.”

Here the Dragons are now, with a chance to avenge their title. For one last time, the entire town of Gretna gets to fill the stands and rally behind this team. This is not just another game for the town, but one that you can expect to see former graduates and residents make the venture down to Lincoln to witness for themselves.

“I feel a great sense of pride in the football team, and not only was I a Gretna graduate, but I was also a football player,” Gretna alumnus Brandon Kinnan said. “I think it’s a really cool accomplishment for the school and town and I’m excited to celebrate and cheer on this team in this last year as only one high school.”

Tonight marks the end of the line for not only this team, but also this town. The state banner will always hang over the trophy hallway, whether they prevail as champions, or go home as runner-ups. Either way, this group of Dragons have etched their place in the hearts of this town, making it a season that no one will ever forget.