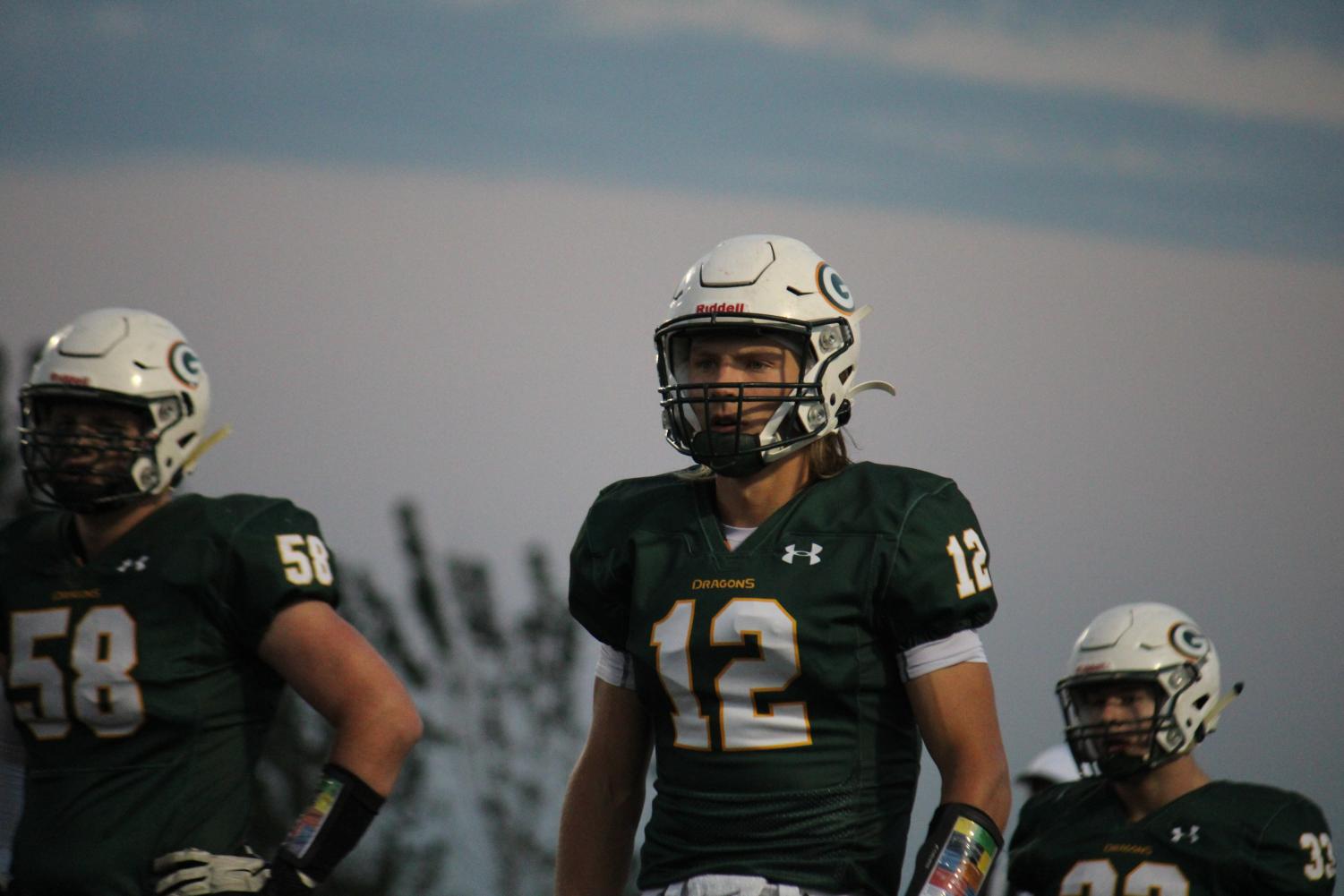 Gretna Rallies for a Fourth-Quarter Win Against Bellevue West

The GHS Dragons saved their undefeated record with a thrilling comeback over the Bellevue West Thunderbirds on Sept. 30. Trailing 37-14 in the fourth quarter with six minutes left on the clock, the Dragons scored 26 points to steal a 40-37 win.
The Dragons came into the game with a 5-0 record, looking to take the win against the 4-2 Bellevue West Thunderbirds. Both were considered top-five ranked Class-A football teams, making it destined to be a shootout.
“I knew it was definitely going to be an uphill battle,” head football coach Mr. Mike Kayl said. “Bell West is a really good team, well coached, we knew it definitely wasn’t going to be an easy game, it was going to end up being a fourth-quarter battle, which it ended up being.”
GHS initially took the lead with two touchdowns. However, Bellevue West went down the field to score quickly, chipping back at a minor lead. With nothing working for the GHS offense, the Thunderbirds took advantage. Bellevue West went into halftime with a 16-14 lead and had everything going for them.
Oklahoma State commit, senior Zane Flores, had an underwhelming first half, and the Dragon’s defense dug themselves into a deeper hole after they gave up three touchdowns, without scoring any on their side. As the third quarter turned into the fourth, many GHS fans lost hope and left the game. A commanding 37-14 lead for the Thunderbirds seemed out of hand for the Dragons. A miracle was needed, and it looked like the Dragons had nothing left in the tank.
“The biggest challenge of the game for me was keeping my composure after giving up big plays,” said senior Blayke Moore. “I knew we were a better team than what we had shown in the majority of the second half. I told myself to not hang my head and go 100% no matter how much we were down by.”
With not much momentum behind their back and the remaining fans on their feet, Gretna started the comeback. Flores connected with senior Blayke Moore for a 35-yard passing touchdown to make it a two-possession game.
“I think the long pass to Blayke got us going,” Coach Kayl said. “You get the long pass and two-point conversion and the onside kick and that’s just momentum building.”
After his extra point, junior Cameron Bothwell attempted the first onside kick of the season. The kick deflected off a Bellevue West player and bounced around until the ball was recovered by Bothwell. GHS regained possession and was back in the game.
“My reaction to the onside kick recovery was pure exhilaration,” said Bothwell. “It was also cool to be able to recover on my own onside.”
Starting the drive with newfound momentum, the Dragons moved the ball quickly knowing there were only six minutes left on the clock. Gretna went down the field on a 35-yard pass to senior Caleb Schnell, and after another short pass to senior Tyson Boganowski, Flores scored on a running play. A two-point conversion from Flores to Moore made it a one-possession game. GHS decided to put their trust in the defense and faked an onside to try and catch the kickoff team offsides. The defense trotted out onto the field and let up a few big plays, and it looked like Bellevue West might run the clock down. The Thunderbirds brought the ball to GHS territory, but their defense wasn’t done. After three plays of no production, fourth down was on the horizon. In a game of inches, the Dragons held the Thunderbirds by just that, giving the Dragons the ball with two minutes left in the game.
After a few short gains down the field, a deep flag route from senior Caleb Schnell put the Dragons within two points of a tie. Flores dropped back and with immediate pressure, rolled out and threw an off-balance throw. Flores had thrown a perfect pass caught by Blayke Moore to tie the game.
“We were actually lined up wrong on one [of the two-point conversions],” said coach Kayl. “Fortunately for us, the guys made some big plays. Zane made a heck of a throw and Blayke made a really good catch.”
With the game now tied, and momentum on the Dragon’s side, GHS defense held the Thunderbirds to a three-and-out possession. Bellevue West went to punt, but senior Ethan Stuhr got a hand on the ball, only letting it go twenty-seven yards. After a series of short passes, Bothwell went out to attempt the game-winning 25-yard field goal.
“Before the game-winning field goal I was just calming myself down, and thinking about all the little techniques that I work on every day to make sure the kick was good,” Bothwell said, “My teammates were also giving me some encouraging words on the sideline which helped with confidence.”
Bellevue West would get one final shot with eight seconds left, but a sack from senior Harrison Weber sealed the deal. The Fans left the game in shock while the Dragons celebrated the wild win.
The win pushed the Dragons to the number one team in the NSAA Class-A rankings and one of two teams still standing with an undefeated record. Following one of the largest comebacks in Nebraska high school history, GHS looks to keep the train moving. With playoffs looming, the Dragons look to defend their state title, and after a jaw-dropping game, this could be a preview of what’s to come on a tough road ahead for the Dragons.