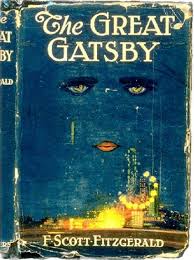 The cover of the assigned novel, "The Great Gatsby" written by F. Scott Fitzgerald.

Each year juniors in American Literature courses are assigned to read the novel, “The Great Gatsby” written by F. Scott Fitzgerald. The novel was published in 1925, written about the tragic life of Jay Gatsby, a self-made millionaire, talking mainly about his pursuit and love of Daisy Buchanan, a wealthy young woman whom he loved forever. He then comes in contact with Nick, Daisy’s cousin. The book is told through Nick’s perspective of how his idea of life and his past have changed based on Gatsby’s effect on Nick’s life. The book has an amazing plot and a good story, and I think it does a good job of showing how things were during that era, for women, different lives of the rich and lower class. It has a good lesson towards the end that Nick learns from Jay Gatsby.
In the novel, they portray Tom Buchanan, Daisy’s husband as a strong, wealthy, superior man. Tom continually has affairs with many women including Myrtle and Daisy. In the book, it shows Myrtle being portrayed and labeled as a terrible person for her actions while Tom is cheating on his wife Daisy and receives no backlash from anyone, showing how society viewed women. Throughout the book, it is clear that women are viewed as objects and as if they are nothing but a pretty face which was very accurate to that era. I think the book does an amazing job of showing how men believed that women were just toys or a good cover-up label. Much how Tom used Daisy as a good label of a perfect family and marriage to a wealthy white rich woman to all the people who viewed them from the outside but constantly yelled and cheated on her.
Along with this, the book very clearly shows the different social classes and the importance of them. Gatsby lived in a very large house and so did with Daisy and Tom being higher class, Nick, Gatsby’s neighbor was a part of the middle class, and Myrtle and her husband lived in the “valley of ashes” which was a place that symbolized the lower class because of the setting. It was a dark, gloomy, place that was very broken down and old. The different settings between the East and West Egg and the valley of ashes show a very clear line of the different social classes in the book, telling the reader who was rich and who was poorer.
I loved the novel ‘The Great Gatsby” because it did a good job of showing how things were during this era, and it had a great story plot that really kept me reading. I recommend this book to anyone who is curious about how the era of the 1920s was. It shows how women were treated, how wars affected people, different social classes, and an underlying message and twist at the end of the book.