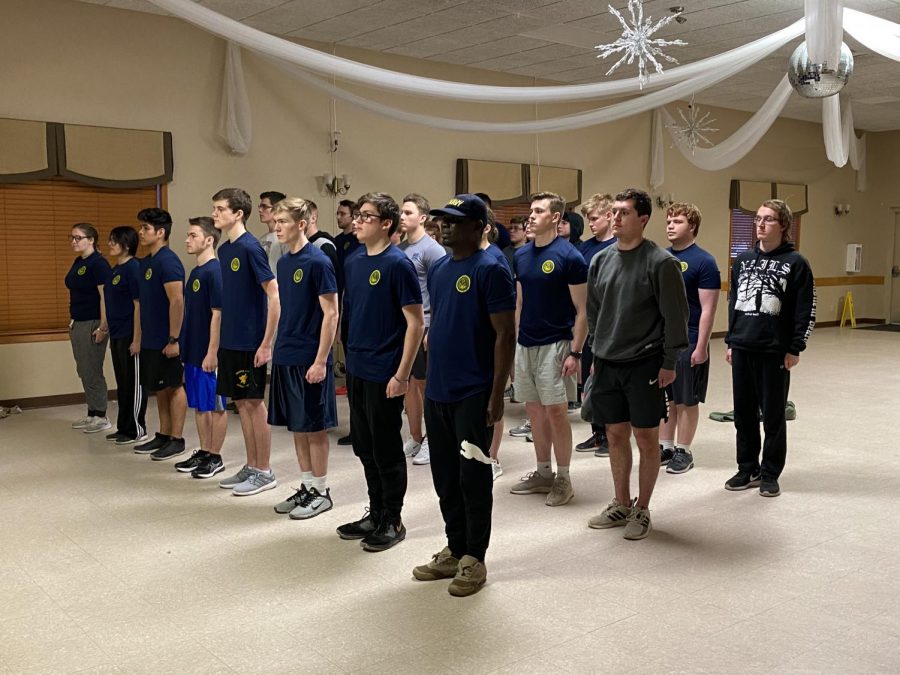 Members from the Omaha area stand at attention as they are given instructions. "We start each meeting by standing at attention," Daily said. "We do this in order to get an idea of the purpose for the meeting." Shortly after they were divided into groups for a friendly competition to test their knowledge.

Some people choose to fight for their country before they graduate from high school. Senior Jeremiah Daily decided to do this at the age of 17.
“The reason I joined the Navy at such a young age was because it was a guaranteed future,” Daily said. “Why mess with college when you can get straight to the point?”
They could not ship him out until after he graduated. In the meantime, he was put into the Delayed Entry Program (DEP) to keep in contact with a Navy representative and stay in shape in order to eventually receive a contract. Daily got in contact with Chief Joel Ramirez in September 2019 and was officially sworn into the Navy in December. He will ship out August 2020, at the earliest.
“Technically I am not an adult until I am eighteen, so I cannot be treated like an adult until I am,” Daily said. “There is a saying in the Navy that goes ‘you are not in the navy until you get paid’ and I just won’t be paid until I turn eighteen.”
The rest of the DEP members in Daily’s area met every other Tuesday. At these meetings, they go over the information they would need to know for their future in the Navy. The members get to know each other and work on team-building exercises that could involve testing their knowledge or physical challenges. All members receive a booklet of information called a start guide, which they should study for later testing.

“Future sailors receive a start guide so they can start their transitioning from a civilian to a sailor, this guide helps them by teaching the fundamentals and core values on what it is to become a US sailor,” Chief Ramirez said. “So when they arrive at boot camp to do the final transitioning, it’s almost seamless.”
Daily is expected to stay in peak physical condition. He was able to go to Offutt Air Force Base and train with the other DEP program members. He also works on his skills in the water which is a necessity for the career path he wanted. Daily aimed to be in the special operations forces. He needs to be able to do push-ups, pull-ups, sit-ups, run a mile and a half and swim five hundred meters in a pool to be considered for any of those roles.
“It’s called a PST, which stands for physical strength test,” Daily said. “Each special (operations) force has their own requirements and you just have to pass the POST, but you want the best possible score in order to receive a contract.”
The DEP helps Daily stay on top of his tasks and prepare him for his future. In the program, he made connections and friends he could possibly see later down the road.
“Looking in the Navy is big, looking out the Navy is small,” Chief Ramirez said. “There is a great possibility that you will be stationed with someone you were in the DEP with, and the reason why the Navy seems so small is once you’re in, you are always moving around from location to location meeting new friends and old friends. Eventually, it seems like you know everyone.”
Daily is not the only high school student that has committed to the Navy in the US. There are many other high school students who are committing to the Navy and other military branches. This option is available to everyone, all anyone has to do is reach out to their local recruiter. Gretna’s naval recruiter is Petty Officer Tyson Miller.